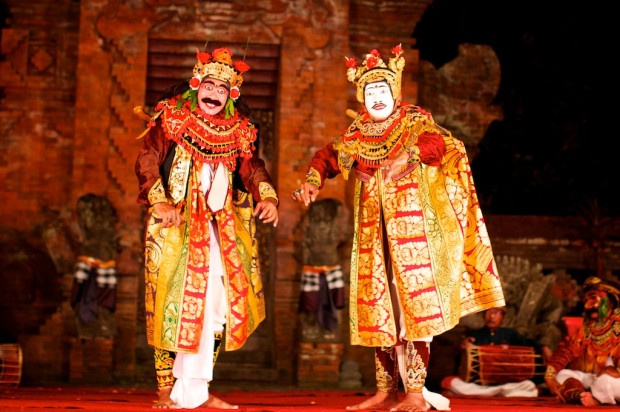 Angelo and I recently had the privledge of taking a Balinese dance class with I Nyoman Joni.  We took the private dance class at the ARMA Museum ( Agung Rai Museum of Art ) in Ubud.  If you ever make it to Bali, try to check out the museum, for the beautiful gardens are enough reasons to visit alone.  The dance class is held in a part of the cultural center where many Balinese children come  to study traditional and popular dance every week.  Joni told us that on Mondays sometimes up to 150 children come for class in hopes to become a professional dancer one day.

Joni himself is a professional dancer who comes from a lineage of dancers and performers.  He has traveled all over the world performing Balinese dance and theatre.  As soon as he started moving, we knew that we were in the presence of someone who is a master of their craft.  He explained to us that all of Bali used to be rice fields, and after his parents were done working in the rice fields all day, they would get together with musicians and practice their art.  He grew up watching his parents not only dance, but they sung and knew how to act.  Joni watched his parents dance but he learned how to dance from others at temple.  His parents had no idea that he was learning Balinese dance until they saw him perform one day at a temple ceremony.  After, they told him that if he really wanted to dance, they would show him the correct way to do it.  He explained to us that dance was in his heart, we of course understood.

We learned two different dances that day, the welcoming dance usually done by women and a warrior spear dance performed by men.  I must take the time to apologize here, for Joni told me several times what the names of the dances were, but I did not write it down and thus forgot.  Also, I’d prefer to not guess what the names were.  Anyhow, we first started with the warrior dance which is supposed to be a more beginners dance.  Uh, it was hard.  The three little girls in the room over who were practicing with their teacher were amused by our hacked up movements.  Although the movements were foreign to our bodies, we really enjoyed learning this Balinese dance.  As a man, the feet are turned out, stance is wide, the shoulders are up and gestures are big.  What was difficult for us was that Balinese dance uses a lot of facial movements, even with the eyes.  So trying to put that together with the hands, feet and body was hard.  The second dance we learned is a welcome dance performed by women.  The knees are kept bent, the feet are barely turned out and legs are closer together.  I really enjoyed this dance, it was much more intricate than the other and also used a lot of the neck.  The music for both dances uses an instrument found commonly in Indonesia called a gamelan.  I found it interesting how different phrasing and rhythms are than western music. Throughout Bali you can hear gamelan played at the temples, and temples are EVERYWHERE .  Overall it was a great experience taking the class with Joni, not only for the dancing but he took his time to explain much of the history and culture of Bali. 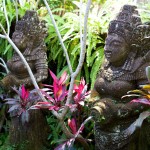 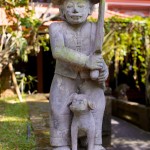 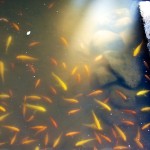 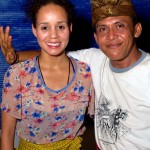 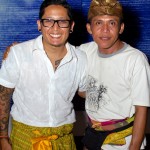 That night we hung around the museum to see the 7:30 performance of Topeng Jimat.  Every night of the week, even weekends, there is a show at the museum.  Tickets are 75,000 IDR – a little less than $7 bucks.  What a steal!! The whole crew comes out to perform for you, the gamelan orchestra and several dancers including our Joni! Joni played an ugly woman for this show 😉  It was an awesome performance, one not to be missed if you visit Bali.  From the costumes, music and dance – it was so great to see traditional dance outdoors in Bali.  Probably I would put this as one of my favorite experiences in Bali. 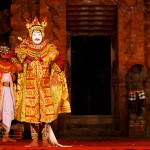 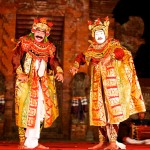 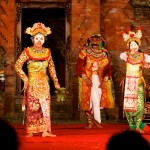 Joni as an ugly woman 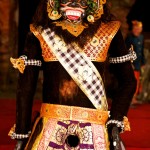 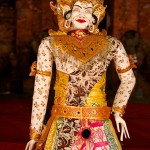 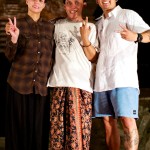