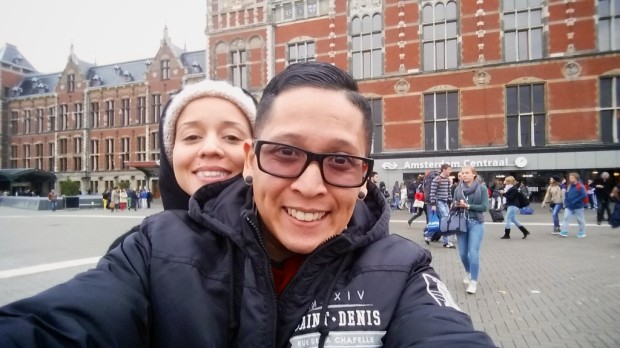 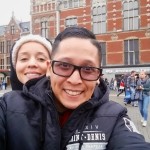 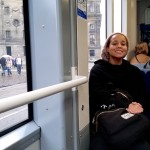 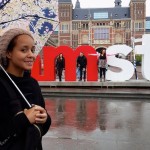 We unfortunately did not venture out in Amsterdam as much as I would have liked. We were staying in The Hague and Dordrect, so the train to get to and from Amsterdam was quite expensive. Anyhow, I look forward to returning to this city – there is so much to see. I would highly suggest visiting in the summer (if you can afford it), as the Netherlands is a pretty cold country. We visited in early October and it was on some days bone chillingly cold. Anyhow, it is a gorgeous city with its many water canals, historic buildings and houses and museums. When visiting Amsterdam, save yourself time and money by purchasing a museum pass and avoiding long lines.

Ok, you get it. We went to the Van Gogh museum, and despite the waiting to get in I loved it. The format in which they present his works is organized and helps the visitor understand/appreciate his art with more depth. Angelo also keenly pointed out the poignancy of Van Gogh’s mental health decline visualized thru his self portraits. Vincent died very young at 37, and his most prolific works were created the last two years of his life after only painting for ten years.

On 263 Prinsengracht street in central Amsterdam, you will find the Anne Frank Museum. Like most grade school children you are introduced to the atrocities of Nazi Germany through the eyes of a young Jewish girl living in hiding for two years. Unfortunately, I knew all too well about that dark period of history due to my Japanese – American grandmother being interned in an Arizona camp (although my grandmothers experience as horrible as it was, cannot be compared to the Nazi Death Camps). Anne, along with her father Otto, mother Edith, sister Margot and four other Jews were able to hide successfully from the Nazis until they were betrayed and sent to concentration camps. Only Otto survived, when he returned to Amsterdam Miep Gies handed over his daughters diary and writings. To visit the space is a very emotional experience even for those of us who were born long after the war. As you enter the secret entrance through the bookcase one can get a sense of how fragile life must have seemed to the hidden occupants and those who were helping them. The windows are still covered with black cloth and the family was not allowed to open shades even an inch during the day. It must have been a suffocating experience, and even Anne writes about wanting to go outside, breath fresh air and run around. Every night the families would listen to the radio hoping for Allied victory. At the museum Anne Frank’s diary is on display, also other diaries and stories that she wrote. Not only was this young adult a prolific writer, but one senses that she was mature beyond her years. Adults and children should visit here to help understand and put into perspective how evil humanity can be. On the other hand it demonstrates how resilient the human spirit is, even under the most confined conditions.

0
The Hague and Rotterdam
Papendrecht and Dordrecht